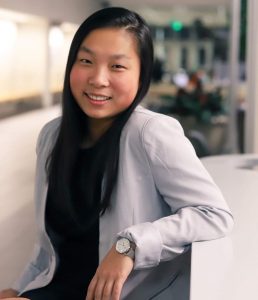 Anna Lin is a Spring 2020 MSU graduate from James Madison College with a BA in International Relations. As a student, she was very involved in the Asian Pacific Islander Desi-American (APIDA) community. She served on Asian Pacific American Student Organization’s (APASO) board, rechartered Alpha Phi Gamma National Sorority Inc. at MSU and founded APIDA Celebratory to celebrate APIDA excellence on campus.

Anna’s undergraduate career helped her find her passion, which is uplifting and empowering marginalized voices to ensure that we are being heard and have a seat at the decision-making table. After graduation, she worked at a nonprofit based in Detroit serving the APIDA community. In her role, she worked with national and local organizations to coordinate Census and voting efforts. She also led a team of interns to create resources for the APIDA community in metro Detroit area. Through this job, Anna realized she liked working with young adults and foster them to become the best leaders they can be as they are the future.

In June 2021, Anna joined the OCAT team as a coordinator and advisor for APASO. Anna is very excited to be back at MSU and working with students to share the knowledge she has over the past year working at a nonprofit. Additionally, Anna is also serving as the advisor for Midwest APIDA Student Union Leadership Summit hosted by MSU in November. Her other projects include APIDA Heritage Month and APASO’s 40th Anniversary. Anna hopes that through this programming, APIDAs will be seen and heard on campus due to COVID and the rise in Asian Hate.